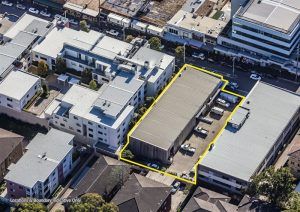 A mixed-use freehold commercial building with development potential in the heart of Eastwood in Sydney’s north-west has sold under the hammer for $19,250,000 in a heated online auction.

The winning bidder of 42-50 Rowe Street in Eastwood was a local private Asian investor.

It was the first time in 30 years that the 1,467 sqm* site improved by a warehouse and showroom asset was offered to the market, with its development potential and location being a major factor in the campaign success.

The sale is one of the largest online auction results that the Ray White group has ever seen, with the bidding starting at $13,000,000 and increasing in fast paced increments.

“It was an incredibly successful campaign, with over 185 enquiries, more than 30 individual inspections and 14 registered bidders logging in online on the day to compete with 77 bids,” Peter Vines said.

“As one of the few retail markets unaffected by the COVID-19 pandemic, Eastwood’s retail market is stronger than ever,” Mr Vines said.

Samuel Hadgelias said that the last minute switch to an online auction platform as a result of the Sydney lockdown didn’t deter buyers, who were prepared to competitively bid to own this coveted piece of real estate.

“We had to make a quick pivot after lockdown was called during the campaign, but it paid off to push ahead and utilise the well-crafted online auction technology we had at our disposal,” Mr Hadgelias said.

The switch to online auctions has been perfected by real estate groups throughout the pandemic.

“Our team were simply able to adapt and carry on with the auction online after all our experience with online auctions last year, this ability to confidently adapt provided great benefit to our vendors,” Jeff Moxham said.

Victor Sheu, who has had a number of successful recent auctions in Eastwood said that these types of assets perform very strongly, and are usually held for generations.

“Buyers are desperate to put their foot on anything in a prime location, where they can take a minimal return and develop in the future,” Mr Sheu said.

“These assets are fiercely contested by many local Chinese and Korean owners,” he said.

“Eastwood is a genuinely unique market as it attracts a range of buyers that have an emotional attachment to the area.”